47 Meters Down: Uncaged (2019), the sequel to the original Mandy Moore led film 47 Meters Down (141 feet down), tries to scare us with cave diving and sharks. While some jump scares were effective, it was more the idea of being trapped that made our hands sweat.

According to the summary on IMDB: “Two sisters diving in a ruined underwater city quickly learn they’ve entered the territory of the deadliest shark species in the claustrophobic labyrinth of submerged caves.”

We’re scuba divers so this film and its predecessor were right up our alley. The first film has us on the edge of our seats with the oxygen sensors beeping. We know what that feels like and the film nailed it. In the sequel, they’ve upped the ante with cave diving, no guide rope, low oxygen, and, of course, sharks.

First, cave diving requires additioanl skills and training to navigate the dive. In one entrance to a cave at Devil’s Den in Florida (we did not go in – just stayed around the opening) we saw a sign with the Grim Reaper warning of death. These signs are posted for a reason. So when these characters admit they’ve never done this before was rather irritating. Second, why doesn’t anyone in these films follow the “Plan Your Dive. Dive Your Plan” rule? They’d know this system was out of their ability, but that film would never sell.

47 Meters: Uncaged’s dark footage makes death feel inevitable and survival helpless. One by one, characters are picked off by the sharks or drown. One death scene flashed Kimberly back to the classic shark film, Deep Blue Sea. Beyond that, nothing stands out about the fate of these characters. In truth, we’re not given enough information to care about who dies or when. Then again, if we’re watching this film, do we expect to care? Aren’t we watching it expecting them to die?

It’s not a perfect film, but it kept our nerves on edge. There’s a reason we don’t cave dive and this film, sans the sharks, is it. So, make some popcorn, grab a drink and just enjoy it for what it was, an entertaining horror film. 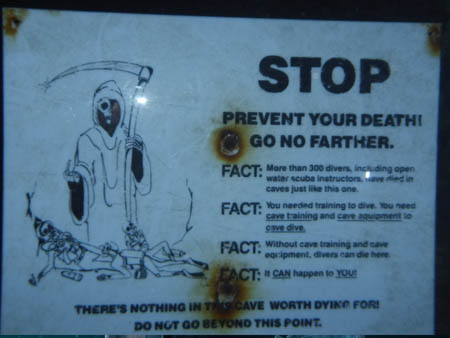